At the beginning of August 2016 and with the help of local friends, Back to Front constructed a living willow sculpture in the shape of a human size snail by the name of ‘Alan’, it is a bit of a mystery why this is so and you better visit the museum to find out! Everyone enjoyed working together to shape the flexible willow into a delightful pattern designed by our lovely frontline workers Jo and Donna. We planted the snail with traditional herbs that anyone can enjoy and admire. Staff from the nearby St James 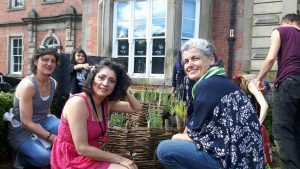 Hospital and passer byes have enjoyed the benefits of the raised beds already at the museum. Thackray Medical Museum became his year’s Back to Front growing hub partly as a result of its location at the heart of the community and also as a result of it’s proximity to St James, the largest teaching hospital in Europe. The museum through its staff has been incredibly supportive of the ‘Back to Front’ approach to food growing and we know of at least one colleague there who had never gardened before but has now started her own productive little plot at home! Liz, we won’t tell anyone who you are!. St James Hospital also recognised the benefits to patients, families and staff of food growing and are also developing their own set of raised beds at local hospitals starting with a courtyard at Chapel Allerton Hospital. Well done to the team and pleased to have inspired them somehow! Workshops at both SHINE and Thackray Medical Museum run once per month until the end of this year. We are very grateful to Esmee Fairbairn for supporting us

This entry was posted in News. Bookmark the permalink.